How to select a celebrity spokesperson

Since I partnered up with Dennis Rodman in the fall of 2013 to create “Dennis Rodman’s Bad Ass Vodka”, I have been speaking with many entrepreneurs and different organizations that all have one thing in common – they want to harness the power of a celebrity to help bring attention and awareness to their company or cause.

Sometimes, people reach out for a casual discussion about the best way to get a famous spokesperson interested in their brand, other times the conversation might be related to the costs they can expect (they’ll always be higher than you expect…) and other times they may want to work with Rodman and make an enquiry about that.

In my experience, most are not asking the most relevant questions –
1. What type of “existing brand” does the spokesperson have, and how will it affect my brand? And
2. Will having a celebrity spokesperson really do anything for me?

To start with my own business as an example – I think we did pretty well by matching Dennis Rodman with our new vodka brand. After all, ever since leaving the NBA, Dennis has been known as an entertainer and the life of the party. Bringing in a famous spokesperson wasn’t an afterthought in our case – Dennis was there from the very beginning, and we were able to tailor part of the offering to fit his persona. Everything from the bull logo on the bottle (a tattoo on Dennis’ chest) to the quotes printed on the back of each bottle have a connection to Rodman. We were trying to create the spirits industry’s version of “Air Jordan”. 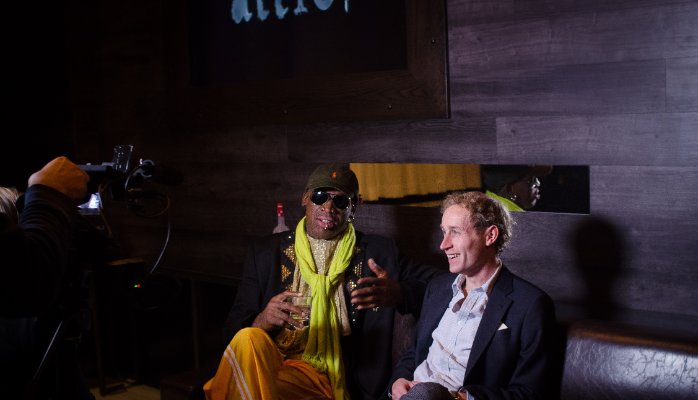 There are countless success stories where celebrities helped transform a business – Michael Jordan with Nike, Ciroc Vodka after enlisting P. Diddy, George Foreman and his grill, Jay Z and the Brooklyn Nets, and I can keep that list growing for a while. There are however many more examples where things just didn’t work out at all, and the company was left with little more than some huge bills to pay, and a line of disappointed backers and shareholders. The success stories mentioned above all had one thing in common – the ability to match their brand with a spokesperson within the same market where they wanted to go.

So as a bit of advice, if you are looking to explore the opportunity of bringing on board a celebrity spokesperson in some capacity, start with the right question – instead of thinking about who you would like to work with, ask yourself who would best fit your brand, and the image you want to project? You should make sure to look at the package that your proposed spokesperson would bring. What type of following does he have? What is his image? Does his lifestyle resonate with our target consumer, and could there be any negatives associated with this person?

There are many aspects to “celebrity branding” and I will do my best to share some of my own experiences over the coming months, but if I had to pick the one thing where I see many clients and brands go wrong, it is in picking someone with no relation or connection to their brand or industry, or someone who simply doesn’t resonate with their client base.

As a final example, I want to mention the liquor industry – I would venture out and say that each week there’s a new “celebrity backed spirit” launched. It has actually gone so far that one of the biggest distributors in the country recently challenged me to bring Rodman to a meeting – they said they’ve seen so many new brands lately where the spokesperson does nothing more than a few tweets and maybe an appearance.

Always make sure you know what you’re signing up for, using a spokesperson with a large following can help put you in front of a huge number of potential consumers, but unless they are the type of buyers you would want to attract – is it really going to be beneficial for you?